FIA decision: The Mecsek is back in the calendar of the Historic European Championship!

The FIA Motorsport World Council made the wonderful decision expected by the Pécs and even the entire Hungarian rally fan camp on December 16: the approved day schedule of the Historic Rallye European Championship 2022 contains nine rounds from March to October in severn countries – on June 23–25 with the Mecsek Rallye in a row.

We can tell you later, the organizers of the Mecsek Rallye were very optimistic about this year’s race day before the announcement. What’s more, it was already seen as a very positive omen on the finish line of the 54th race that Mr. John Naylor accompanied OK with a friendly smile as a kind of one-word quick assessment and acknowledged the race that had just ended for them with his thumb up. And even if we know that he praises the days with a receipt, the “OK” of the chairman of the FIA Historic Motorsport Committee, who has been delegated to Pécs to assess and comment on whether we are worth continuing, is definitely authoritative and empowering gesture in this sport.

And on December 16, the race calendar became final, although the race in Pécs was a week later than originally planned (June 23 instead of June 16), but it should be the least in the fierce international competition for the rights of the director…

Eight of the nine events were already with us in the 2021 season, and the Swiss Rallye du Chablais is replacing the Rallye International du Valais as a new item on the calendar.

The season starts this time in Spain: the Costa Brava Rally returns to its usual place in March after being forced into a season-closing position in November due to the covid outbreak in 2021. Then, after Moldavia in May and then Rallye Du Chablais in early June, the Mecsek finally follows.

In the summer, Weiz in Austria and Lahti in Finland, the only gravel race on the calendar, will fit into the summer. The autumn will be opened by the Spanish Rallye de Asturias Historico and the field will move to Italy for the last two laps, with the Sanremo Rally Storico closing in October after the Elba Storico. 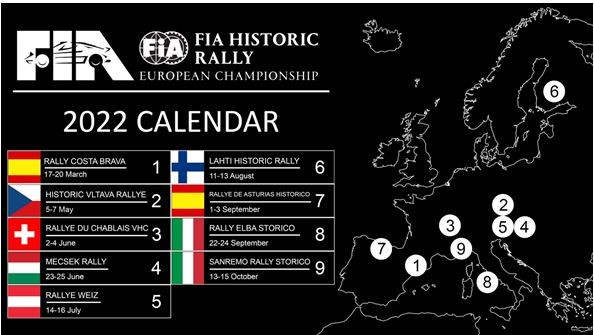 In addition to the calendar, the World Council has also decided on changes to the sports regulations this year, the most important of which are:

After the meeting, John Naylor made the following statement on the FIA website:

“The Historic 2022 offers the nine best events in Europe. We know eight of them well, and each promises a high level of organization and challenge. The inclusion of the Rallye de Chablais in the calendar is also to be welcomed. It is a well-known race that will create challenging conditions for riders on the roads of the Swiss Alps. ”

The amendment to the rules was considered to be “aimed at raising the profile of the European Championship in Historic Rally, encouraging greater participation in the championship and clarifying some of the rules that we felt needed to be reviewed. I am confident that the new EHRC calendar and changes to the rules will increase the number of competitors in the tournament next season. ”