WRC2 world champion Mads Ostberg – Torstein Eriksen paired with Citroen C3 Rally2 to win the 54th Mecsek Rallye Rally1. In the second place behind the Norwegian pair, András Hadik and Krisztián Kertész, who raced in the Ford Fiesta, finished in a double with a 33.6 second lead, the third was the Polish duo Grzegorz Grzyb – Kamil Kozdron, who started with Skoda Fabia, they finished 38.2 seconds behind the winning Ostbergs. In the Histric European Championship, the Zippo-Dennis Piceno duo won with Audi.

Mads Ostberg won five of the ten speeds in the Rally1 field, winning a start-finish victory as he led the race after the first stage on Friday night and made sure the victory was not in jeopardy.

“We really enjoyed the race, we could go on cool speed stages, thank you to the director for the weekend, it was good! We fought serious battles and congratulate the Hungarian competitors, because they dictated a serious pace, ”said the winner on the finish podium set up in Széchenyi Square.

For the last speed of the race, Róbert Bútor-Tagai was still in the second place, but they submitted their tickets in front of the finish podium. Even before the race, they decided to do so, as they started with a Citroen C3 WRC at the Mecsek Rally, which is so much better technique than the other drivers that they did not want to have a say in the development of the Hungarian championship. They started the car for the first time in a rally race and got to know each other so well that they won four special stages on Saturday.

“We’re over a good little race, but our tire tactic didn’t come in. We wanted to get a little closer to Ostberg, but we didn’t succeed. Congratulations to them on their victory! ” András Hadik said on the podium. While the Ostbergs were being chased, they fought a huge battle with Grzyb, who had overtaken them early Saturday, but the Hadik team turned in the ninth gear and secured second place in the final leg.

The ninth stage did not bring any luck to Frigyes Turán and László Bagaméri. They were in fifth place when they tried to surprise a place ahead, but slipped off the road and smashed the Volkswagen Polo thoroughly.

In the RC4 category, the two Baranya doubles enjoyed six speed battles. The victory of László Ranga Jr. and Annamária Budai was finally decided in the seventh stage, when Gergő Szauer and László Rácz made a mistake, they also had a small technical problem with their car, and they lost more than a minute. Gábor Német and Tamás Szőke finished third in the category, they also competed with Peugeot 208 Rally4.

It started outside the competition, but Péter Ranga and Ernő Büki gained unforgettable moments for the audience. In memory of the six-fold Hungarian László Ranga, they completed the stages of the Mecsek Rally with an age-old painted Subaru Impreza.

The best in the ORC category was Attila Rongits – László Hannus, who started with Mitsubishi, and the international Mitropa Cup was won by the German duo Manuel Kössler – Melanie Kalinke.

In addition to modern cars, veteran race cars also competed in the Mecsek Rally. The winner of the FIA ​​Historic European Championship was Zippo – Denis Piceno. The Italian duo, racing with the Audi Quattro, performed similarly to the Ostbergs, took the lead on the first speed, and remained there on all eleven stages. They won six speeds, and their victory was in jeopardy only when they arrived at the service station with a derailleur loosened after the fifth stage. The mistake was rectified by the team, so the Zippos – whose civic name is Andrea Zivian – won the race with confidence.

“The race was incredible, I loved it! I really liked today’s first speed stage, but the other tracks too, this place is beautiful. The competition was very well organized, we thank the directors for the opportunity. Thank you for your support to my team and my navigator, who have a lot of work to do this weekend, ”Zippo said. 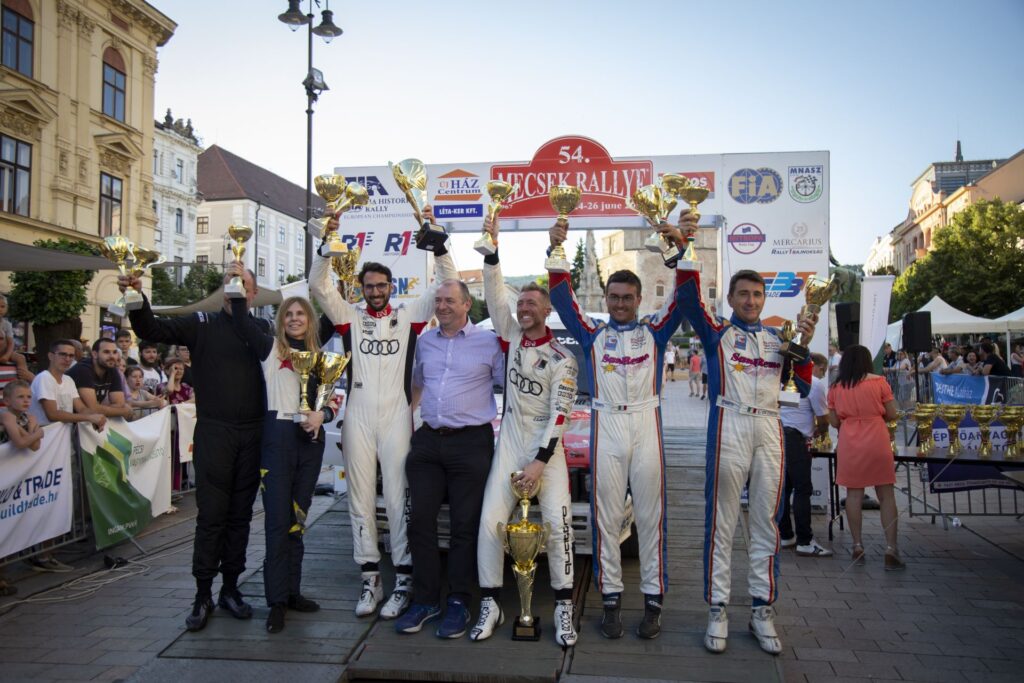 The best Hungarian pair of Historic Eb were László Mekler and Edit Mikoer.Miko, they finished in the absolute seventh place and were second in their category.

In the Hungarian Historic Championship, Ferenc Wirtmann and József Kerekes won by more than 4 minutes over Zsolt Kalapács and Kornél Kalapács.

Detailed results of the 54th Mecsek Rallye are available on hauserresults.hu.

The unofficial result of the 54th Mecsek Rallye Rallye1: